Find out how to make homemade hash browns entirely from scratch in just three simple steps. Enjoy the ease of pulling these hash browns out of the freezer for a super easy and healthy breakfast. 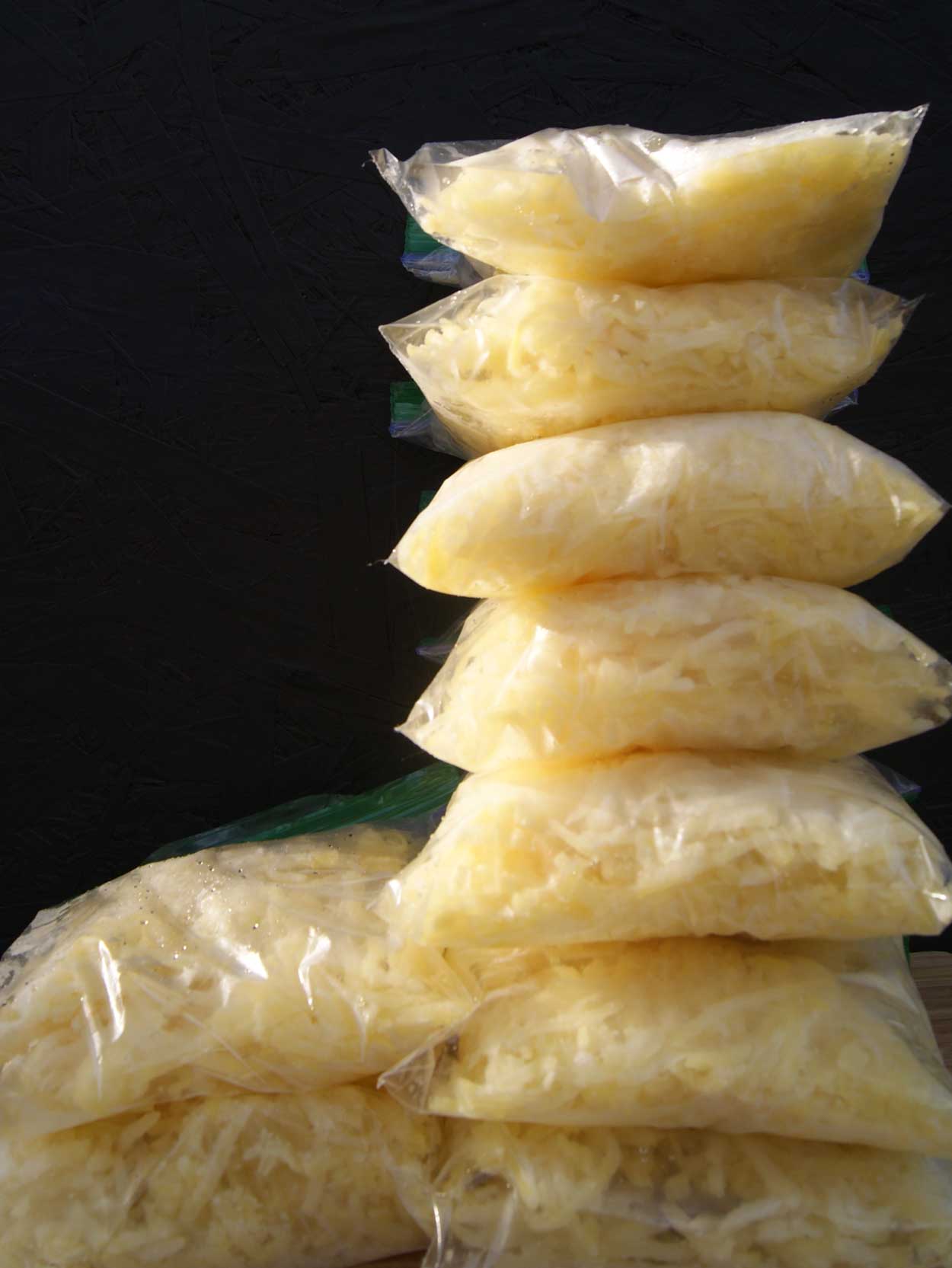 Making hash browns from scratch are a great way to avoid unnecessary starches and rancid oils. There's one ingredient in these frozen hash browns: potatoes, which makes it naturally Paleo and Whole30 compliant.

The best part about these hash browns is that it's almost effortless. Most recipes for crispy hash browns require soaking the shredded potatoes in cold water first, then rinsing, then squeezing them to remove as much moisture as possible.

We can avoid all of those steps simply by parboiling or partially cooking the potatoes first which will naturally remove a lot of moisture from these spuds. This post is full of very helpful information so try not to skip over and just get to the recipe.

We go through potatoes pretty quickly around here. There's a myriad of ways to prepare them, from pan-frying them, to adding them to soups and breakfast casseroles.  I even have a Pinterest board devoted strictly to potatoes because this is a food staple that is versatile and cost efficient.

Whether you're harvesting your own, or you snagged a few bags at a discount, freezing hash browns is a great way to preserve these spuds before they start sprouting and spoil. 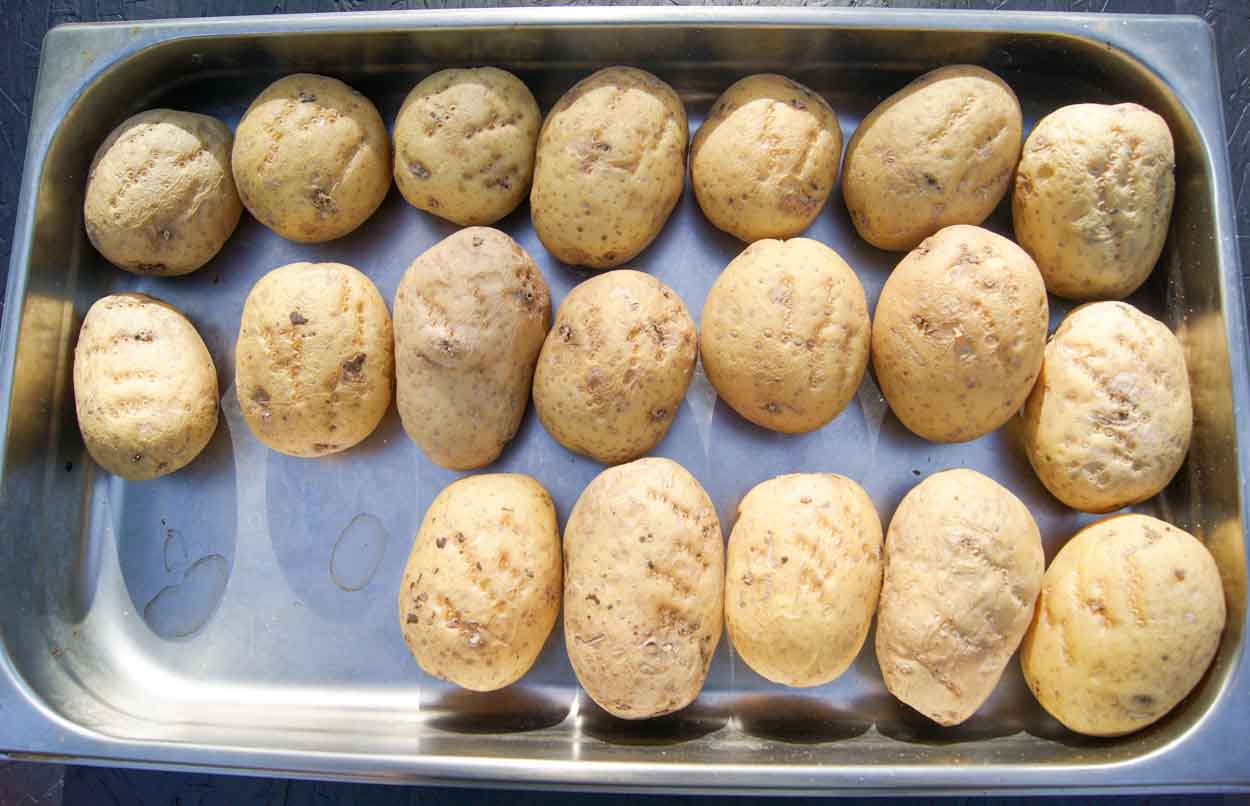 Yukon Golds are the best potatoes for hash brown patties because they hold their shape the best after being cooked. But starchier baking potatoes like Russets will give you a better crisp.

In my experience, I have found that when using the method below (cooking then freezing), the type of potatoes is less important than how you preserve them. The reason is because the potatoes are already parboil before being flash frozen, thereby reducing the moisture content significantly.

In short, all potatoes would work great for hash browns provided that you parboil them first.

How to Parboil Potatoes

Parboiling is the process of partially boiling the potatoes just until they are fully cooked. This works for smaller batches and is super easy to do.

Place potatoes in a pot and cover with clean, cold water. Cover the pot with a lid and turn the stove to high heat. Once the water starts to boil, reduce the heat slightly to avoid the water boiling over and continue to boil for 7-10 minutes just until the fork or tip of a sharp knife goes in with slight resistance. Once cooked to desired doneness, remove boiled potatoes from heat and let them cool completely before handling them.

To cook in Instant Pot, place potatoes on a trivet with 1 cup of cold water. Close the lid and set the valve to sealing position. Press "Manual" and cook for 5-8 minutes, depending on the size of the potatoes. Yukon Golds usually need 5 minutes to parboil while Russets need the full 8 minutes. Once the cooking cycle is complete, allow 5 minutes for natural pressure release, then move the seal valve to release remaining pressure. Remove potatoes from Instant Pot to and allow to cool completely before handling them.

Method 2: Baking potatoes in the oven.

This method is ideal for large batches because you can do 20 pounds at the same time, provided you have the baking pan to handle that quantity.

Clean and scrub the potatoes and poke them a few times with a fork.  Place all potatoes on a baking sheet (I used similar to this one) in single layer. Bake at 350F degrees for 45 minutes or until just fork tender. You don't want to overcook them.

Remove potatoes from oven and allow to completely cool. You may then transfer them to the refrigerator for a few hours or overnight.  This will make the grating much easier. 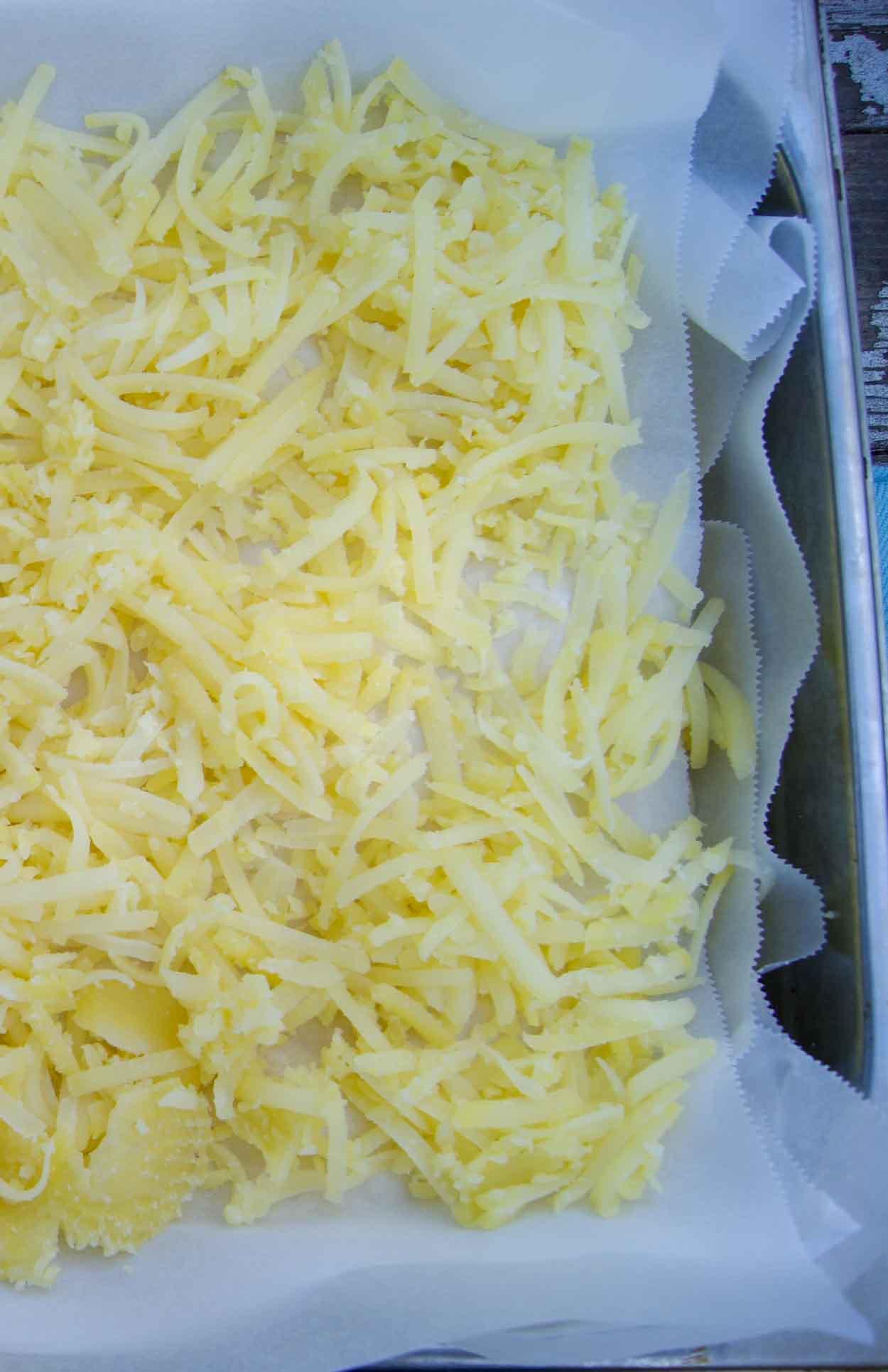 How to Freeze Potatoes

The most practical way for our family to preserve potatoes is to partially cook them first and then freeze.  Raw potatoes should never be frozen. It completely changes the texture and the potatoes become completely unpalatable.  You must cook the potatoes first before freezing.

For detailed instructions, be sure to read this post in it's entirety for helpful hints and tips. But to freeze potatoes (i.e. preserve) or to make hash browns for easy breakfasts, the simple steps are as follows:

Step 1: Parboil the potatoes. There's two ways to do this easily as mentioned above and it will mostly depend on the quantity of potatoes that you are wanting to freeze.

Step 2: Chill the potatoes. This is an important step - do not skip!

Step 3: Shred or dice potatoes. Using a box grater or food processor, shred the potatoes. Alternatively, you can also dice into cubes. 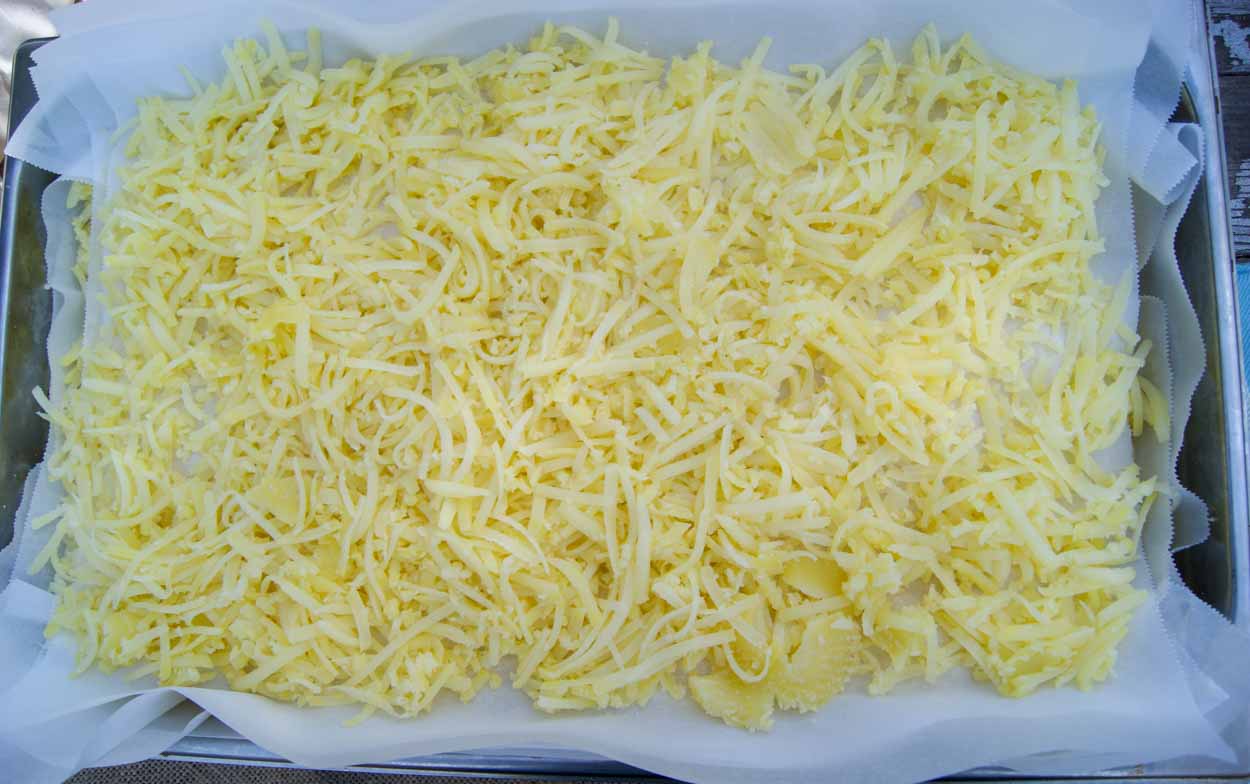 Once the potatoes have been parboiled or parcooked in the oven, cool them just enough to peel the skin off with a paring knife. Sometimes, this step is easiest when the potatoes are still slightly warm but you need them to be cool enough to handle.

Allow the peeled potatoes to cool completely before proceeding with the next step. For better results, transfer your cooled potatoes to the refrigerator for at least 4 hours or overnight.

Shred the chilled potatoes with a box grater, food processor, or Kitchen Aid attachment. Alternatively, you can also dice the potatoes into small cubes to be added to breakfast casseroles and/or hashes. Use this magic chopper to get the job done quicker.

Spread the shredded or diced potatoes in a large baking pan/sheet about ¾" thickness. For a large batch, cover the potatoes with a parchment paper and spread another layer of shredded/diced potatoes. You may do several layers depending on how deep your pan or sheet is. For a standard cookie sheet, two layers of shredded potatoes would be maximum. For a deeper pan like this one, you could probably do 4-5 layers.

Pop the pans/sheets in the freezer until the potatoes are completely frozen, at least 4 hours or overnight for best results. Break apart the potatoes and transfer to baggies or containers. These large 2-gallon reusable silicone bags are great for this purpose. 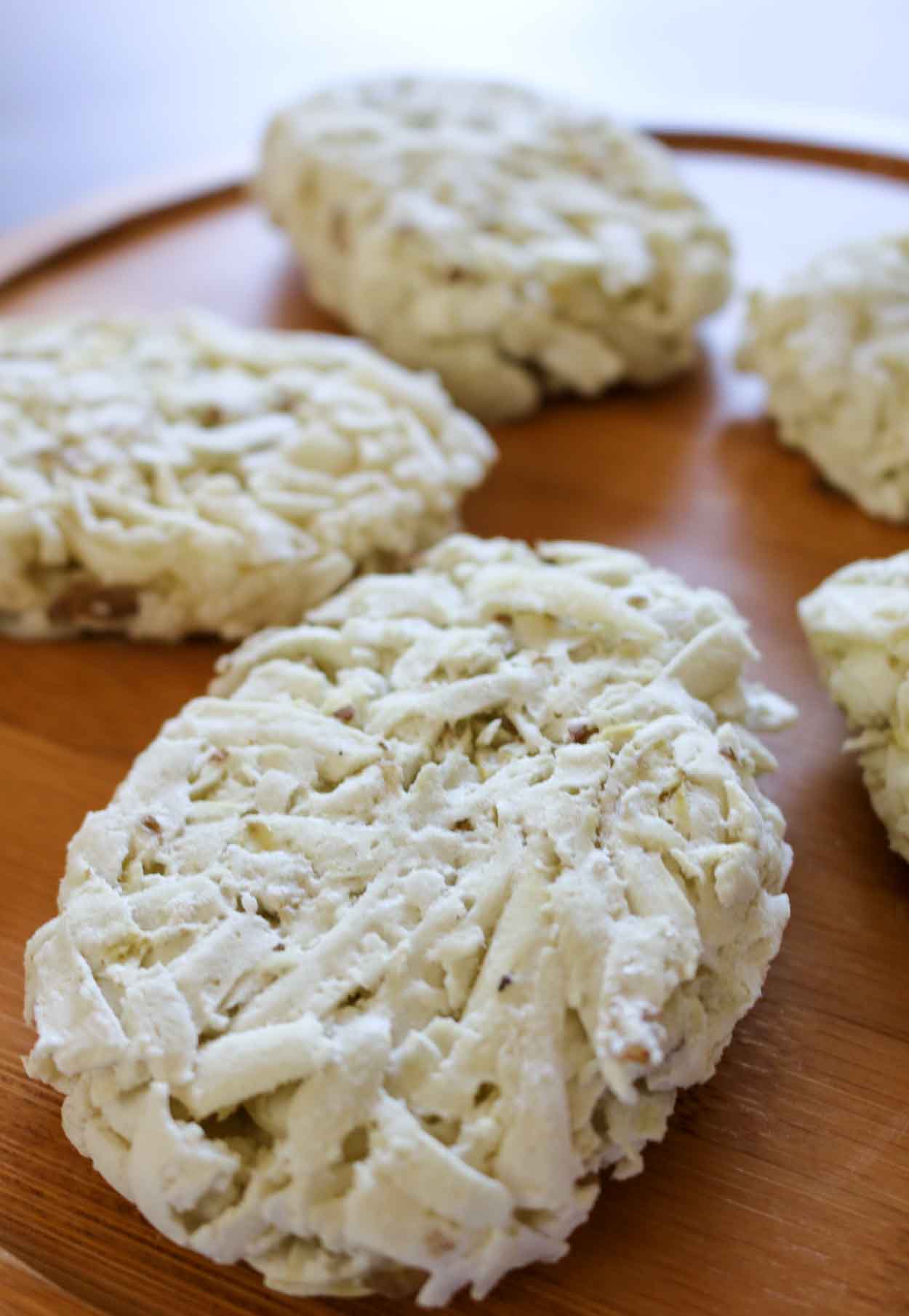 Using a wide-mouth mason jar lid (just the ring part), oil the inside of the ring with coconut oil or avocado oil and spoon few tablespoons of grated potatoes inside the ring. Press firmly (having oiled hands avoids potatoes sticking). Invert, remove the ring, and shape into ovals using hands. It's also fun to use cookie cutters instead and make fun shapes. Flash freeze in single layers using the same method as for hash browns, separating layers with parchment paper.

Transfer frozen hash brown patties into freezer bags or containers until ready to use. 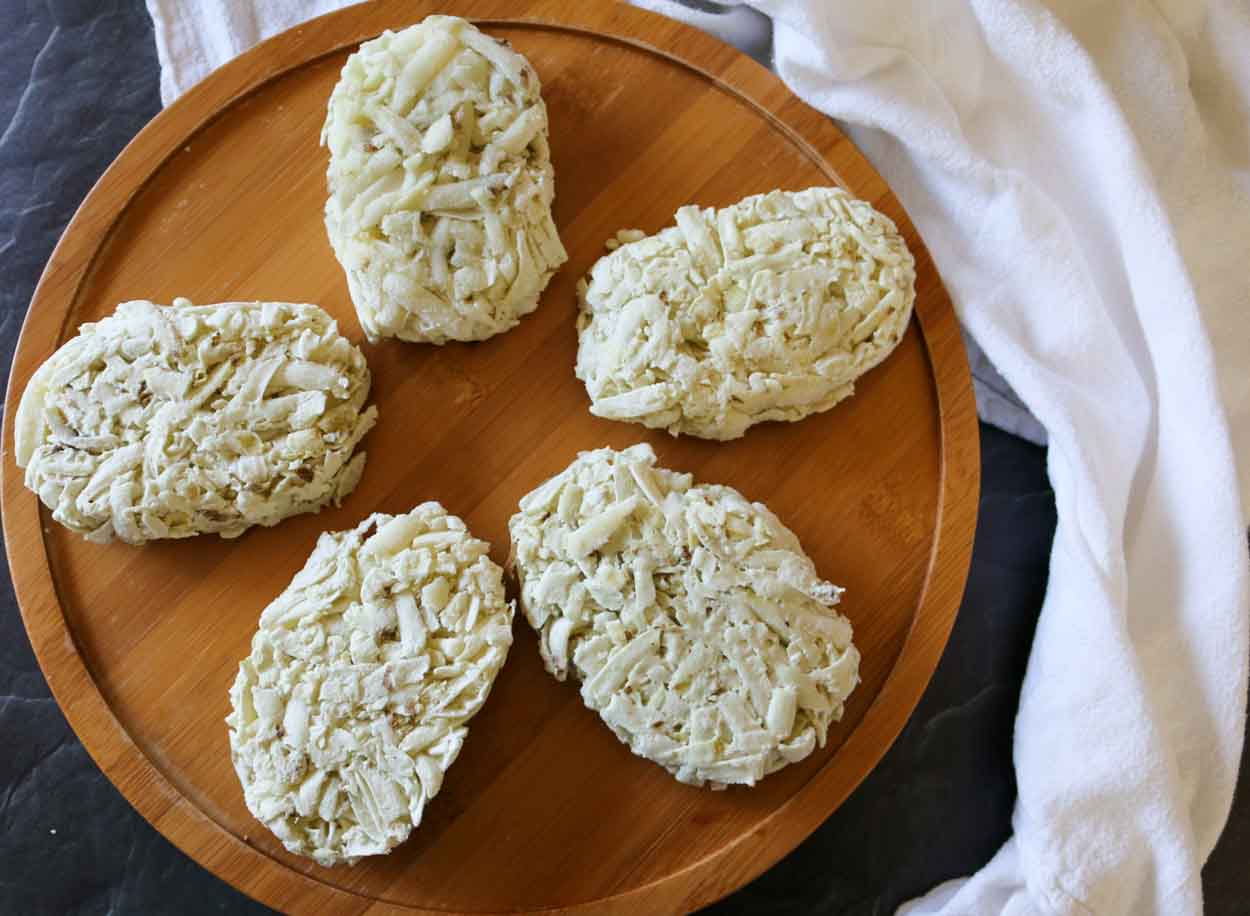 Hash browns are typically used in recipes in three different ways: casseroles, skillets, or as oven.

Casseroles: If using them in a casserole, it's best to thaw hash browns first and drain excess liquid. Keep in mind, this thawed moisture will be minimal because the potatoes are partially cooked anyways and this will be a natural result of freezing/thawing process.

Skillet or Hash:  If cooking them straight on a skillet or for a breakfast hash, frozen works fine. Be sure the skillet is warm/hot and very well seasoned with butter or another cooking fat. Add enough hash browns to cover the surface of the skillet. Let the potatoes fry, without disturbing until golden brown on the bottom (3-5 minutes). Season lightly with salt and other seasonings, then using a wide spatula, flip potatoes in sections. Add more butter or cooking oil as needed.

Oven: Thaw shredded or diced hash browns and drain excess liquid first. Spread the hash browns evenly on a baking sheet and bake in a 450F degree oven for 10-12 minutes, but watch them closely. The frozen patties do not need to be thawed. They can be baked in the oven at 350 F degrees for 40 minutes or until golden, flipping them halfway. 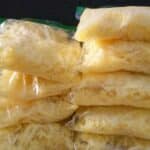 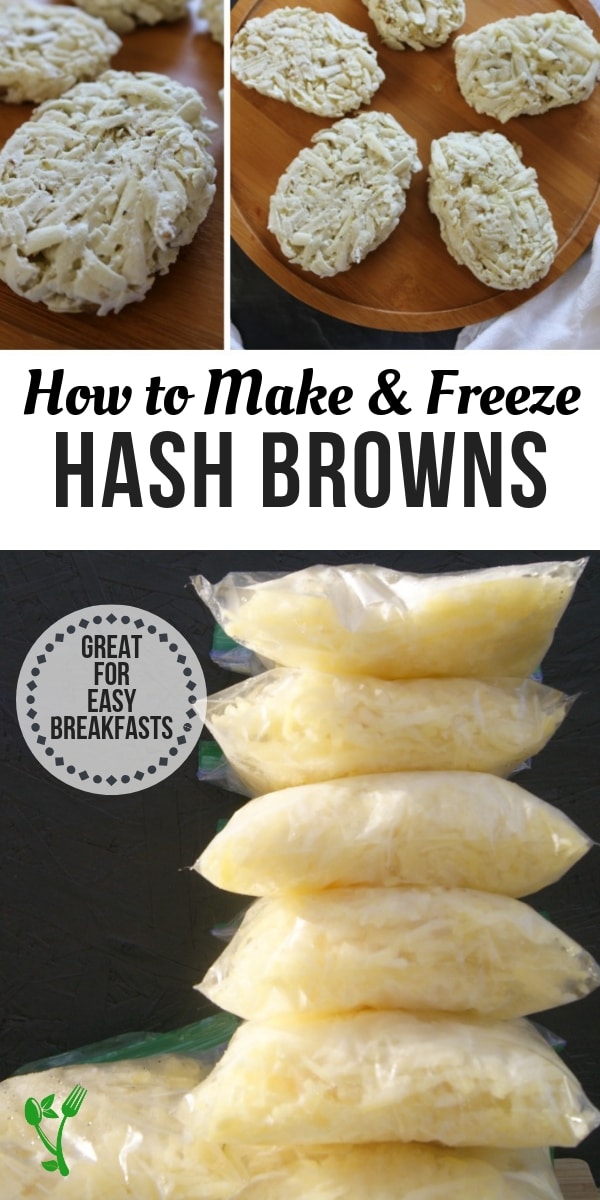 Note: This post was originally published March 2016 but has since been updated to include helpful information.